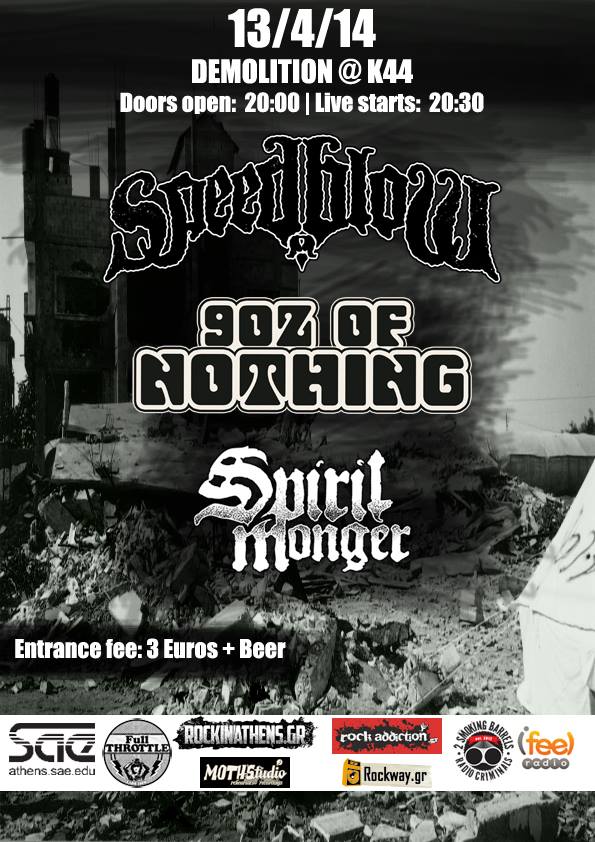 Spirit Monger was formed by Paul & Pantelis at late 2012 and has been complete as a band since early 2013, with Chris & Jason tagging along. Dio replaced Chris on bass, in Octomber 2013.Our genre could be labeled as Heavy Rock/Metal with a touch of Doom, but It’s hard for us yet to designate exactly what we play as a band, since it hasn’t even been a year that we formed the band, though what we want to transfer to the people is an uneasy, dark, heavy and full of energy feeling from our music. Our live recording demo got finally released at January 2014 and we are searching for gigs to show people what we are all about. We are preparing our debut album (we currently have no label) which will be released in the summer of 2014.

9oz. of Nothing was founded in the begin of 2013 in Athens, Greece. It was formed by Nikos Choulis (Guitar/Vocals), Fotis Antoniou (Drums) and Stathis Magklaras (Bass) and its Heavy rock/Stoner style is a general description of its music. Importing heavy sounds to people’s ears is the main target of the band while sharing their music through recordings or live on stage is the main way to accomplish it.

Their song “Green God” was selected to be part of a compilation by No Future Productions .
https://archive.org/details/NoFutureProductions2013DownloadCompilation_915

and “Black Sun” for Bands You Need To Hear Vol.4 – Skratch The Surface by Loud-Stuff.com
https://loud-stuff.bandcamp.com/album/bands-you-need-to-hear-vol-4-skratch-the-surface

Speedblow came into being in March 2009 by John T and Costas P. Elements such as devotion and stubbornness (in the good way), melody, heaviness, energy, groove, originality (as far as possible, given the times we live in) and above all, the will to work as much as needed to reach the bands goals and meet its expectations, combine the founding stone of the band.
Speedblow plays heavy metal music with influences from the heavy rock and doom genres, with a strong presence of melody, harmony and rhythm.
In August 2009 the SPEEDBLOW EP was released, consisted of 4 tracks.
In September 2009 the band started working on its upcoming debut album “Fields Of Doom” which was released in February 2010.
Speedblow is a strongly motivated band that will continuously make music and support it in any way possible, even if it means relocating in another part of this world….or another.