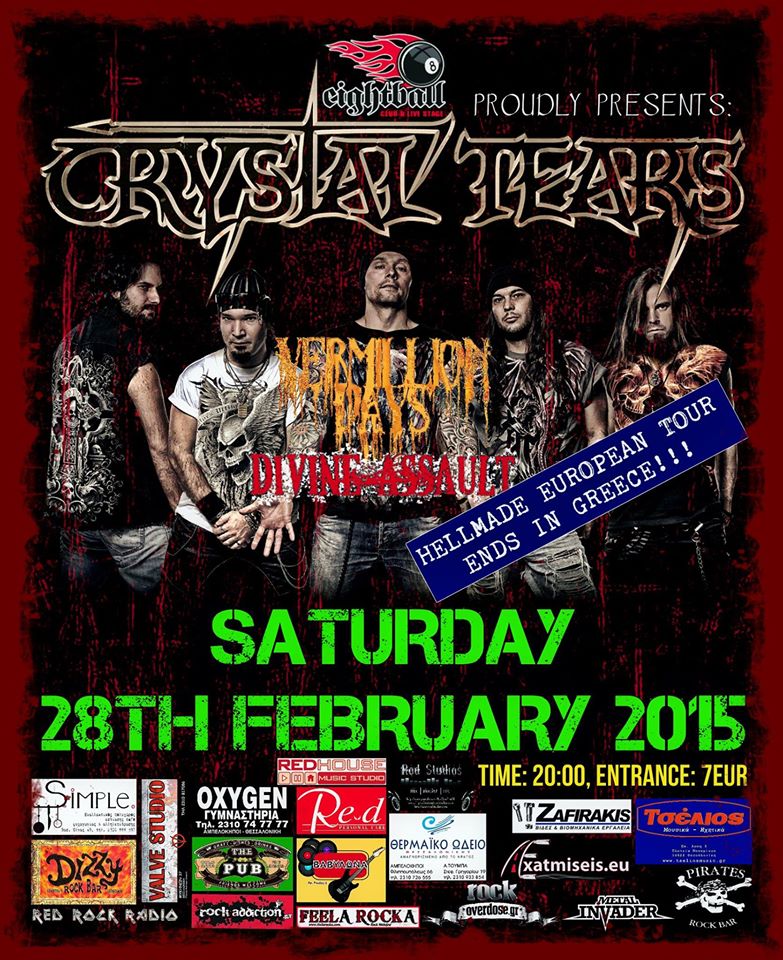 “It’s fucking Saturday night, let’s go out & find a metal band, phone up our mates & start remembering what it was like to enjoy ourselves again! We’ve just got to get off our asses & out onto the street!” BRUCE DICKINSON

THESSALONIKI!!! You wanted hell… you’ll get some!!! After their european tour with MYSTIC PROPHECY and FIREFORCE, CRYSTAL TEARS visit their homeland to finish what they’ve started… Hellmade European Tour ends in Greece!!! The night opens with thrash metalers VERMILLION DAYS and DIVINE ASSAULT!!!

DIVINE ASSAULT (https://www.facebook.com/divineassaultband):
Divine Assault is a thrash/groove metal band of a bunch of metalhead youngsters formed early 2012 in the city of Thessaloniki. They started as a cover band, but the first compositions didn’t take long to appear. Since 2013 & up ’till now they’ve opened for local heroes Sarissa & shared the stage with quite a few local bands as well. The band is currently working on their own original tracks – to be released hopefully soon – while they are in search of a permanent drummer.

VERMILLION DAYS (https://www.facebook.com/VermillionDaysOfficial):
Vermillion Days is a thrash metal quartet from Thessaloniki, started in 2007. It was not until the end of 2009 when their debut EP “In the Warfield” saw the light of day receiving great feedback by the Press. The band has shared the stage already with bands such as Sodom, Tankard, Flotsam & Jetsam, Suicidal Angels, Crystal Tears & more. Vermillion Days are currently working on their latest material, which will soon appear as their first full-length album.

CRYSTAL TEARS (https://www.facebook.com/crystaltearsband):
“The world’s a stage, we plug & play”! With a steady evolution from the band’s first demos to its latest instalments, Crystal Tears have managed to leave their mark as one of the most qualitative heavy metal acts of Greece. Marrying melody & aggressiveness with an attitude at the same time, roots can be traced back to the good ol’ heavy metal up to the new metal patterns. The band’s debut release received an overwhelming applause by the worldwide metal underground scene, while their second album, having conquered quite a few poll places as one of the best power metal works of the year, initiated their first greek tour. After a line-up upgrade, the band would start working on new material that would become their third full-length album… “Hellmade”! Having stepped it up a gear, Crystal Tears sound more brutal, heavy & melodic than ever before. With producer R. D. Liapakis (Mystic Prophecy, Devil’s Train, Suicidal Angels etc.) on the front again, the band evolved in a metal riffing machine, stop at nothing. Metal riffs, shredding guitars, pounding rhythms & catchy melodies, for once more the guys have proven to be natural instinct fighters dedicated heart & soul, managing to sound constantly inspired, fresh & to reinvent themselves. And as good ol’ friend Ryan Roxie (Alice Cooper band) says… “all is rock”! “Hellmade” is out via Massacre records.

✔ Sick & tired of the same ol’ stuff?
✔ Wanna go out & have some real fun?
✔ Wanna experience the ultimate heavy metal show?
✔ On a Saturday night?
If that’s so, Thessaloniki, you have an appointment this February!!!